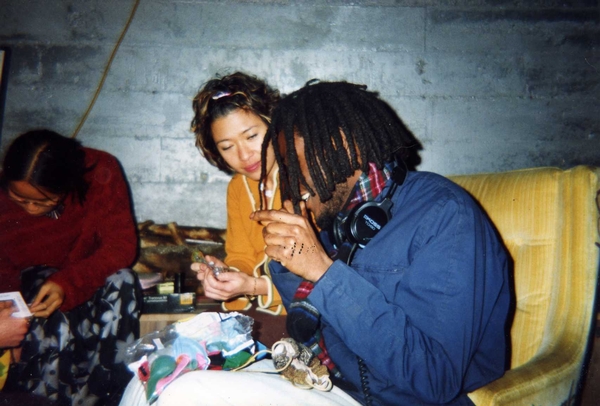 True tale from the streets Episode One.

“Yo man, nice skateboard. I need you to come swing it like a bat into my car window… Locked my keys inside”

I got a flyer
For weeks my friends and I had been going to The Edge in Jax Beach, Florida. They played “baby rave” music from 1:00 – 5:00 am on Friday and Saturday. Bruce Wilcox was the DJ. He played the usual commercial “meat market” club music of the early 90’s in Florida. Hip Hop, Alternative Rock, Indie, Punk, Shoe Gaze, and finally the “rave music” we would all come to hear.
I loved the nonstop music, the lights, the super baggy pants, the cool girls, and the way they moved. This was my new home. Then it happened. Somehow there was a flyer with a number to call later that night. I would attend my first real rave. LIT!

Pluto
I am 20 years old in 1992. A Jazz/Music Education major at my first year of university. I drive a 1985 Chevy Cavalier with black sharpie graffiti all over it. New to the wonders of Lysergic acid diethylamide, the idea to do so came about during a marathon trip. Seemed like exactly the thing to do at the time.
My naive, newly minted raver mind could not conceive that my car looked like a “druggy mobile” to the po pos. (boys will be boys. LOL).
At the time my nickname was Pluto. Due to being so “out there” with my dreams and imagination. (For example, being a famous DJ Producer someday, etc). The sides of the doors had the word “PLUTO” in huge bubble graffiti letters. Along with various scribbling and tags from friends and such.
We had gone out to the car to spark a blunt and vibe out to the Pharcyde tape Jamie had just bought. All was lovely. Mad kids were in the parking lot doing likewise. It felt so exiting to be out super-late at night in this makeshift nightclub in an abandoned mall. Dancing to this new music nobody knows of. What was cooler is that there were kids just like me. Different than most, but the same as each other.
We get to meeting and greeting as the acid kicks in fully. It’s like an open air chillout room. Next to my car is Big Red and his crew. Some good ol’ southern boys out for a rave. Red, Mike, Daryl, and Tony.
Good people.

Oh Shit!
“Time to go back into the club man. I’m high ass hell!”
“Yeah, me to yo. Let me just go put my backpack into the whip….” I say this just as I reach to open the door of my little Chevy. Looking down I can clearly see the keys in the steering column.
“Oh Shit” (This is the second “Oh Shit” moment of the night. The previous one will be chronicled in the next episode).
I tell the homies that we’re locked out and that must sacrifice the tiny back window in order to sort the issue.
Bet. It is what it is we all agree and look for someone with a jackhammer.
On the way I see Big Red again. This time he’s riding a Natas Kapas skateboard and attempting to ollie while shitfaced. Seems like a good idea, right?

Yeah, Break it!
“Yo man, nice skateboard. I need you to come swing it like a bat into my car window… Locked my keys inside”
“You serious bro?” inquired Red, sheepishly. “Yeah, break it. I’ll go to the junkyard on Monday and get a new one to put in myself. It will be much cheaper than a locksmith at 4 am on a Saturday night.”
“Ok then. You’re not gonna be mad, right?” quipped Red. “You good bro” I replied.

And so the deed was done
Red broke the shit out of my window. We went back in and danced way past daybreak. Who does this? The lawless wild wild west devil may care attitudes. The music. The fashion. The expression, and the individuality was addictive.
On the way out the party the promoter thanked me for coming and handed me a flyer for the next event. WOW!
Being the type of kid who always walked to the beat of his own drum, I was well accustomed to being on the outside looking in. Yet, he had just welcomed me into the fold. I was one of them. A raver.
20 years old and not a care in the world. It’s the summer and school is out. All I need is money for food, blunts, rent, gas, a few hits, and the next rave.
I felt like I had just begun an epic journey of unimaginable proportions.
Over 25 years later, this appears to be the case.
True story.

Until next episode………
AAx