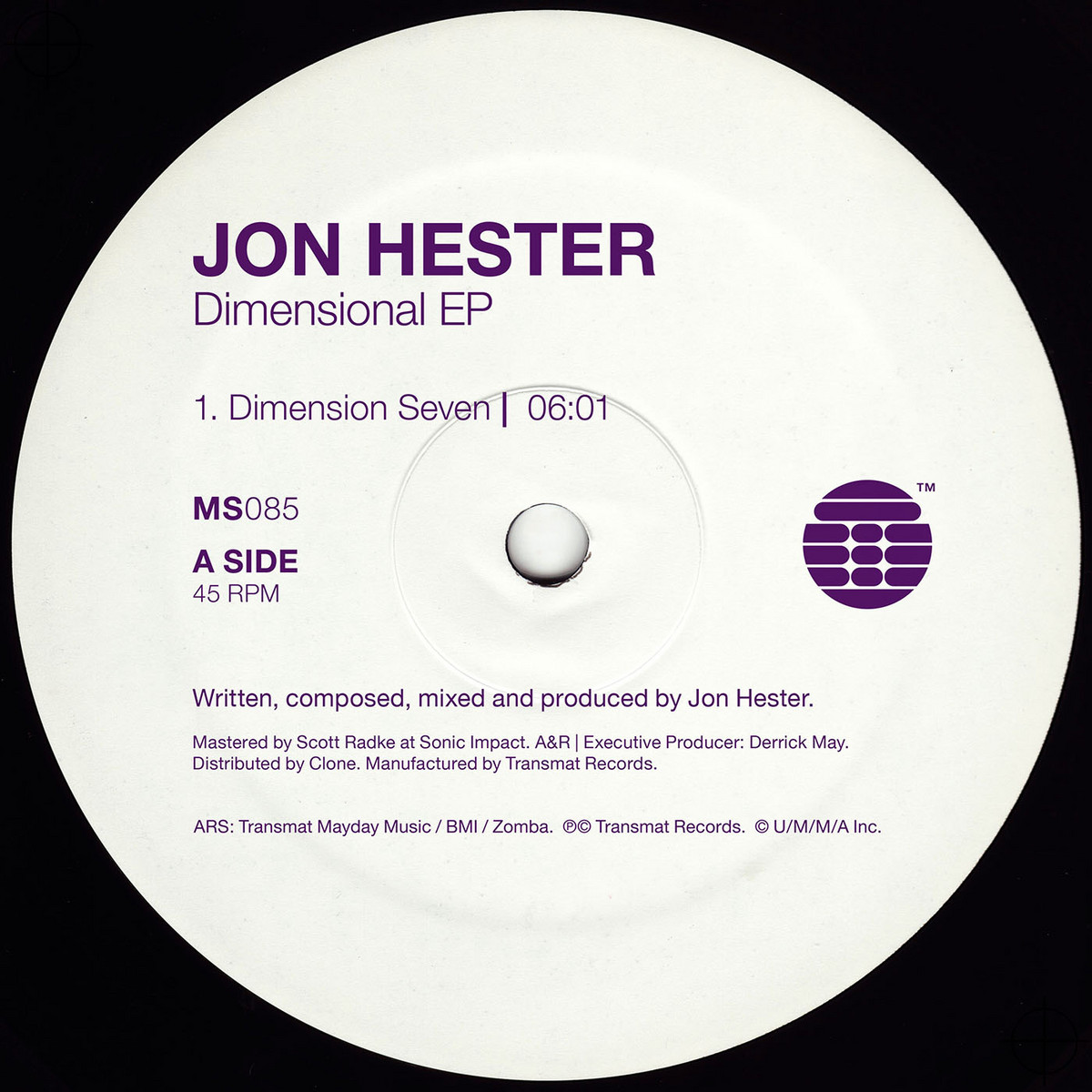 One of our very own… Doing it Big!

Today we venture into new territory. Taking cues from the Mighty “Little White Earbuds” created by Mr. Steve Mizek, alongside Mr. Kristan Caryl’s lovely “Teshno“, I now step forth humbly to attempt to pick up where they left off. No small task indeed. As these blogs stand as monolithic giants within our culture. Read on sight go-to’s for all things House, Techno, and Underground Electronic Dance, they are sorely missed to this very day. Consider me/this blog, their son.

We inaugurate the Record Review section of amir-alexander.com with Mr. Jon Hester’s Dimensional EP. Freshly out on Derrick May’s Transmat Records. A three track journey into the mind and soul of one of the New School of U.S. DJ/Producers.

Three tracks made by a dancer for dancers, one is struck immediately by the infectious bounce of “Dimension Seven”, the opening track. A round/slamming kick, closed hi hat, and conga sweep the listener away in a futuristic tribal groove. As a syncopated bass line snakes it’s way in between the cracks and crevices of the already established, and rock solid groove; we are well underway.

The percussive elements progressively evolve in complexity creating a rich tapestry of rhythm that compels one to move. Heads nod, toes tap. An irresistible groove. Deft usage of subtle, yet effective reverb add depth and a sense of breathing life, as the lead synth now comes to the fore. A rolling melody that propels the track with a sense of perpetual motion.
As the filter opens up, the intensity is heightened. It is no wonder that this track would find it’s way on Transmat, as one can easily hear this in one of Derrick’s sets. Detroit techno at it’s finest.

A syncopated three note snare pattern joins the fray just before the halfway point, culminating in a classy new-school drum roll into the breakdown. It’s brother; the clap follows suit accenting every other fourth beat.
Jon uses the breakdown in a very interesting way here. Not to release tension, but to increase it, as he cuts the beat and bass. The drum roll break actually builds into the peak in a very fresh and interesting way. Good stuff!
Just as the beat comes back in we are left with a sense that a freight train has just sped by. Coming and going in a flash.

Then suddenly, the natural flow ebbs back into the eternity of time space. We are gently put down in the very spot where which we were first carried away. This is perfect to transition into, and or out of the peak of one’s set. It works just as well as the apex itself. Repetitive and hypnotic in all the right ways, it seems as if Jon has dared us not to dance. Irresistible rhythms.

Opening with a booming slightly distorted kick, reminiscent of the glory days of Chicago. Fans of raw ghetto tracks will take notice immediately. However, Jon distinguishes himself with the use of subtlety and restraint. This is an exercise in all things minimal.

909 Toms provide the bass line. Bounce is the adjective that continues to come to mind. He uses syncopation to lay a groove, as well as pockets therein where which the dancer/listener can vibe out in the space in between. The four note lead melody is like a space-age Pied Piper calling the Children of the Drum to the dance floor. Subtle chord stabs provide counterpoint in an almost call and response manner.

Opening and closing of the filter(s), along with the varying amounts a strategic reverb work wonders. The ever shifting rhythmic foundation is where the variation is to be found. Shaker sixteenth notes, along with a ride cymbal on the upbeat lead the track to it’s apex. As this unfolds, the chord stabs employ varying degrees of sustain for emphasis as they respond to the call of the melody. Reverberated claps, like exclamation points fire off at will. A restrained banger, this.

From the very first measure we are hit with that classic two beat Detroit groove. One championed by the mighty Jeff Mills, Derrick May, and new-school phenom DVS1. The head absolutely MUST nod. If standing, hips will sway. This man means business. Jon is not here to mess about (around for us Yanks).

Once again the metaphor of trains comes to mind. Equally from the relentless 2 beat groove, and what sounds like techno minions pounding in railroad spikes on the upbeat of every even numbered measure.
Yet a third type of pounding kick is employed here to devastating effect. Jon takes his time as he introduces all the percussive elements before we get some synth. And when it comes, boy does it come! To the delight of the listener in the form of a lush pad, and an insidious synth stab opposing the railroad spikes on the odd numbered up beats. Here, less is more.

Just before the breakdown, this time in true form, one notices that the sub bass line has snuck in shadowing the pad melody. A glorious tension relieving breakdown ensues. Kick and bass line give way to the pad and synth stabs before the pad disappears altogether post break. After which kick and bass come back pounding like a sledge hammer. Here the track has evolved into a “club dub” of itself with only drums, bass line, and that synth stab left to the duties of bringing us back home.

Versatile EP for the dancers

In Jon Hester’s Dimensional EP we are given a glimpse of a young master really hitting his stride. It is apparent that this man has spent untold hours honing his crafts as a Dancer, DJ, and Producer. This record hits all the marks and is indeed worthy of its position in the venerated discography of Transmat.