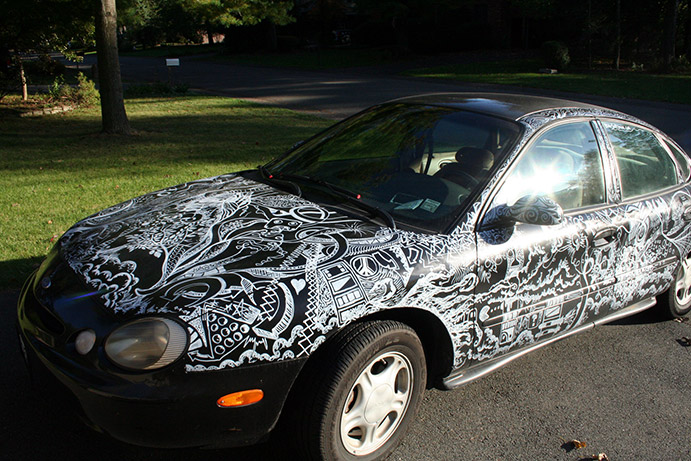 “we should most definitely have been arrested that night”

Three young lads, tripping balls, and riding dirty on a Saturday night in the early 90’s. Amir is driving the “Pluto trip mobile”, Adam is riding shotgun, and Jamie is in the back with a box of 50 Tampa nugget blunts, and an ounce of cheeba. Later that night they will attend their first official rave, but for now they’ve decided to chief up a few blunts and ride out listening to the new Pharcyde tape.

Seemed like an excellent idea at the time, so we did just that. The plan is to do the scenic route on the way to the abandoned mall, chief up, and let the acid do it’s work so we hit the party primed and ready to dance.
All is going well as the tracers and body buzz both creep up on us. (By this time I have logged hundreds of hours acid driving. Not proud of it, it just is what it is). Coming out of downtown Jax we are the only car on the highway.

“This tape is DOPE!” Everybody is vibing out as the album unfolds. We had all seen the video for “Passing Me By”, so expectations were high. So far, the 4 Kids from LA have not disappointed.
Then I see them. Out of nowhere come 4 squad cars. The boys in blue. Jacksonville’s finest starting to follow me. Just as I tell the boys what’s up the speakers ring out “Oh Shit!”, then the song of the same name begins to play.

Suddenly they fan out and surround us on all 4 sides. Front, left, right, and rear. We ride like this for what seemed like an eternity. “Look normal! Act sober! Don’t look at them!” All these things could be heard as we prepare for the worst. The pressure was on me to not get us caught so “I focused power”, trained my gaze on the rear lights of the car in front of me, and hit cruise control to keep my pace steady.

After what seemed like forever, but was actually likely only 5 minutes we approached an off ramp/exit. In a flash all 4 po po cars peeled off the highway toward the krispy kreme donut shop that had the “hot donuts now” sign blazing.
For a couple minutes we all sat in silence trying to comprehend what had just happened. Then suddenly we all began to yell, and cheer. No jail for us tonight. “How the hell did they not just pull us over?” I asked. “Who cares as long as they didn’t get us” Adam answered. “Word up” Jamie chimed in.

We made our way to what would become our first rave ever. Acid heads in search of acid house. Doing unspeakable things. Driving recklessly, breaking the law, and participating in deviant activities.
Us kids with our Adidas suits, and super baggy jeans sleeping all day and staying out all night must have seemed quite strange to our families at the time. We should most definitely have been arrested that night, but it wasn’t meant to be.

I am now the only one who still actively engages “the culture”, as it were. For the other guys it was a passing phase. For me it was like an orphan finding his tribe. The music has given me the opportunity to live my dreams. To discover myself, and to almost destroy my own life.
I am thankful for it all. As I cannot imagine even being alive right now without such a life giving force underpinning my life for the last three decades.

Once upon a time, a kid could have a dream and pursue it to fruition. A nobody kid from nowhere special. These days, not so much. Time and place (context) are crucial. The luck of the draw must be accounted for. I write these episodes to demonstrate my “universal normalcy”. Meaning, my story is not different than most every other kid in the scene. Except that I totally went for it.
This is something that anyone who believes in themselves can do. Surround yourself with people trying to accomplish similar goals. Support one another, and NEVER GIVE UP!

taking my own advice

So now I find myself returning from hiatus to find the entire climate has changed. And thus, I must rebuild everything from square one. Much of the sector that was home to me and other similar House artists has been decimated and doesn’t exist anymore. So many artists don’t even play out these days. Yet, I choose to remain positive and be optimistic.
This is my career, my business. Built up over the course of almost 3 decades.

So despite the leanness of the land, as it were, I must struggle to find a way. For the culture, the artform, my son, my self, and for those coming after me. Each one, teach one. In the scene many will grow old, but few will become elders. It is a responsibility one must accept.
Looking back on my life in this scene, I am inspired to continue to be that “regular guy who broke out” (even though according to the industry press, I never have. LOL) At any rate, I either let the story end, or I blaze ahead and forge the next chapter.

Any artist who completely dedicates themselves to their craft can begin to feel some kinda way when they feel ignored, or slighted. This is natural. Yet, at some point, dealing with the industry creates the opportunity to truly become the positive and laid back person one claims to be. Because it’s either that, or become a stressed out A-hole no one can deal with.
After having tried on both hats, I’ve settled on the former, not the latter.

“The battles are with oneself. Convenience is the lure.”

I’ve never been connected. Just stating fact. Never had anyone to give advice, etc. Just a regular dude in an extraordinary situation trying to find my path, while making hella mistakes on the way.

Looking back, it’s not what you say, but how you say it. During my implosion I never did or said anything hurtful. I was just an unpleasant areshole who was bringing people down. It takes humility to admit this.
My bad.
Ok then, what’s next?